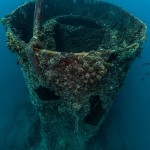 With over twenty shipwrecks dotting the Florida archipelago that is The Keys, it is a diver’s paradise. Off the coast of every Key from Key Largo to Key West, there are shipwrecks steeped in history with mysterious origins. Each wreck has a story to tell, regardless of the tale of their demise.
In addition to the wondrous tale each ship has for any diver that will listen, they reflect a stoic beauty unrivaled by most any other site on earth, above or below sea level. Aside from the mystery and beauty of the shipwreck itself, there is all the tropical fish who call the artificial reefs home. Using the wrecks as shelter from larger predators, hundreds of thousands of trunkfish, butterfly fish, angelfish and tang fish- among many, many others- convene on the wrecks to create a huge, mobile rainbow of sea life.
From every era from the times of slavery to the Spanish American War to World War II, there have been shipwrecks off the coast of the Keys. Along the infamous Shipwreck Trail, there are some wrecks more beautiful, intriguing and worthy of your time more than others.
The USS Spiegel Grove, An intentionally sunk U.S. Navy ship is the world’s largest purposely sunk wrecks. With a deck covered entirely in green lobed star corals and assorted whips and fans, this ship is a playground for SCUBA divers. Over 500 feet in length and nearly 100 feet wide, the USS Spiegel Grove has tons of tight spaces to explore and admire the building coral since its sinking in 2002. Be sure to get a picture with the easy-to-spot American flag, still in remarkably good condition.
Among the most mysterious and beautiful is the Duck Key Wreck. Not far off the coast of Marathon Key at a depth of only 25 feet, the Duck Key Wreck can be found in the clearest water in the area, home to some of the most beautiful fish in the world. The element of mystery makes the dive site that much more astounding, with the only confirmed information is it was a steam powered freighter built in 1889.
These wrecks were thanks to everything from inclement weather to aggression to running aground on the numerous reefs surrounding the Keys. Some brought human lives to the bottom of the sea with them while some are artificial reefs intentionally sunk to protect sea life. All these ships met demise for unique reasons, but they all share the same fate in a watery grave for divers to behold for generations.