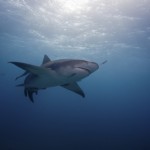 The classic movie Jaws made all of us think that shark attacks are looming in every inch of the ocean. Can you here the theme song in your head? It’s not uncommon for vacationers to avoid coastal waters in fear of a shark attack. However, shark attacks are very rare and shouldn’t deter you or your family from enjoying a wonderful beach vacation full of sun, sand and swimming.

Just in case you’re still on the edge about swimming in the ocean, we have some facts and statistics for you that might help get your toes into the water. First of all, there are 500 different species of sharks that swim throughout the globe. From sharks that are less than one foot long to great white sharks, less than twelve out of the 500 have been reported in an attack.

When an attack happens it ends up on local, national and even international news. This makes beach-goers think that they are the next one to be attacked and the waters they visit must be infested with sharks. Each year there is on average only four fatal shark attacks in all the oceans of the world. Four shark attacks in 365 days, in all the bodies of water.

It would be fair to say that sleeping in bed is more dangerous than swimming with sharks. If you’ve been considering or planning a coastal vacation, don’t let the fear of shark hold you back. However, you might want to make sure that your hotel beds are fairly close to the floor.