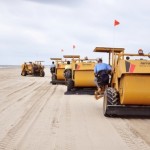 The BP oil spill back in 2010 was a monumental and historic disaster of epic proportion. It killed thousands of animals and birds along the coast and in the deep waters of the central Gulf of Mexico. The massive oil spill, which shot 170 gallons of crude into the Gulf over the course of 85 days, was projected to have profound impacts lasting generations on the tourism and economies in the coastal states.
Projections, apparently, were inaccurate. In the months following the oil spill, feverish efforts were made to contain and clean the oil. Once the source- at a depth of 7,000 feet- was cutoff after 2 and a half straight months of spewing crude, every known tactic for oil removal was employed at the water surface. These include burning off the oil, diluting it with solvent and skimming it for filtration. But after only about three months after the disaster and about 2 months of these intensive efforts were initially employed, the oil just seemed to disappear.
Having shrunk from about the size of Kansas to the size of New Hampshire, then effectively disappearing entirely, the oil slick appeared to clean up itself. This left a lot of those leading the cleanup efforts in skeptical disbelief. Convinced it didn’t simply disappear, asserting it is still under the surface of Gulf waters, those with local interests and environmentalists were not very quick to accept such unbelievable news.
But the writing was on the wall; the oil could not be detected with the naked eye on the shores of the Gulf nor using radar under the surface. Skimmers picked up 10% of what they were skimming in May 2010 by the time June rolled around, and then a fraction of that, and then nothing. But where did it all go? Surely it could not have been cleaned up using the surface and coastal techniques over the course of less than 4 months.
Experts assert the oil was simply broken down by the Gulf and Mother Nature. Salt water quickly degrades oil, and that’s what happened here even before it reached the Gulf surface. And the oil that did reach the surface was quickly broken down in the baking, tropical sun and warm water. Add to this the degenerative impact from high seas and strong winds and the oil dissipation is easy to understand. A much more complex, biological reason for the degradation has to do with microbes. In the deep sea microbes devour hydrocarbons, prevalent to crude oil.
Fear over the long-lasting impacts on tourism, and subsequently the economy, to the Gulf Coast region was rampant when word of the spill first hit. Even after oil was no longer found, there was an eerie silence, waiting for the other foot to drop. As questions across the nation loomed, tourism to the area did suffer. But this was in great part unfounded, as the minimal oil remnant found on Gulf Beaches were only in the immediate weeks after the spill.